Ham and Bean Soup (Šunkom i Pasuljem) is very easy to make just through everything in the slow cooker and leave it overnight at low setting and in the morning you’ll have the soup ready. You can keep it for a few days in the fridge or freeze the soup for later use. 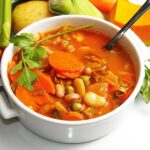 This is a very simple recipe you can prepare into slow cooker overnight sleeping while it cooks.
Course: Soup
Cuisine: Serbia
Keyword: ham, potatoes

Explore other recipes from the traditional Serbian cuisine.

Did you make this Ham and Bean Soup (Šunkom i Pasuljem) recipe?