Pepper and Potato Stew is an easy and simple vegetarian meal recipe that can be served by itself or along with noodles or pasta. Balkan cuisine is heavily influenced by Mediterranean cooking and vegetables are an important part of it. 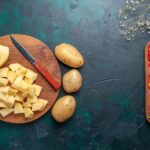 This an easy and simple vegetarian meal that can be served by itself or along with noodles or pasta.
Course: Side Dish
Cuisine: Serbia
Keyword: Peppers, potatoes

Explore other recipes from the traditional Serbian cuisine.

Did you make this Pepper and Potato Stew recipe?