Croatia Punjeni Artichoke is one different approach how to implement artichokes into your meals. The used part of the plant is the artichoke flower heads, which has one of the highest amounts of antioxidant for vegetables. The plant believes to be originated from the Mediterranean and today is grown mostly in the Americas and the countries bordering the Mediterranean basin. The exact origin of artichokes is unknown 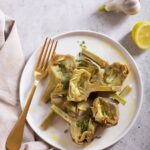 Explore other recipes from the traditional Croatian cuisine.

Did you make this Croatia Punjeni Artichoke recipe?