Eggplant Pepper Spread or Kyopolou is popular Bulgarian vegan spread prepared from from roasted eggplants, peppers, tomatoes paste and garlic. Similar spreads are popular in the Balkans and Turkey but with different variants and names such as ajvar or pinđur. 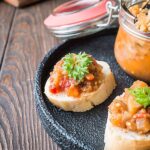 Explore other recipes from the traditional Bulgarian cuisine.

Did you make this Bulgarian Eggplant Pepper Spread (Kiopoolu) recipe?

This salad has a great mix of salty, creamy, crunchy and soft.