Greek Panzanella is a salad of soaked stale bread, onions and tomatoes that is popular in the summer.  This is a Greek version of the original recipe from the Italian cuisine which until the 20th century was based on onions, instead of tomatoes. 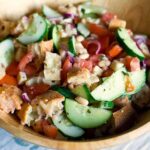 This is perfect side dish or salad that is easy to prepare and is delicous and healthy.
Prep Time20 mins
Cook Time15 mins
Total Time35 mins
Course: Side Dish
Cuisine: Greece
Keyword: Croutons
Servings: 6

Explore other recipes from the traditional Greek cuisine.

Did you make this Greek Panzanella recipe?

These string beans with beef are made in a salad from Slovenian cuisine. If you